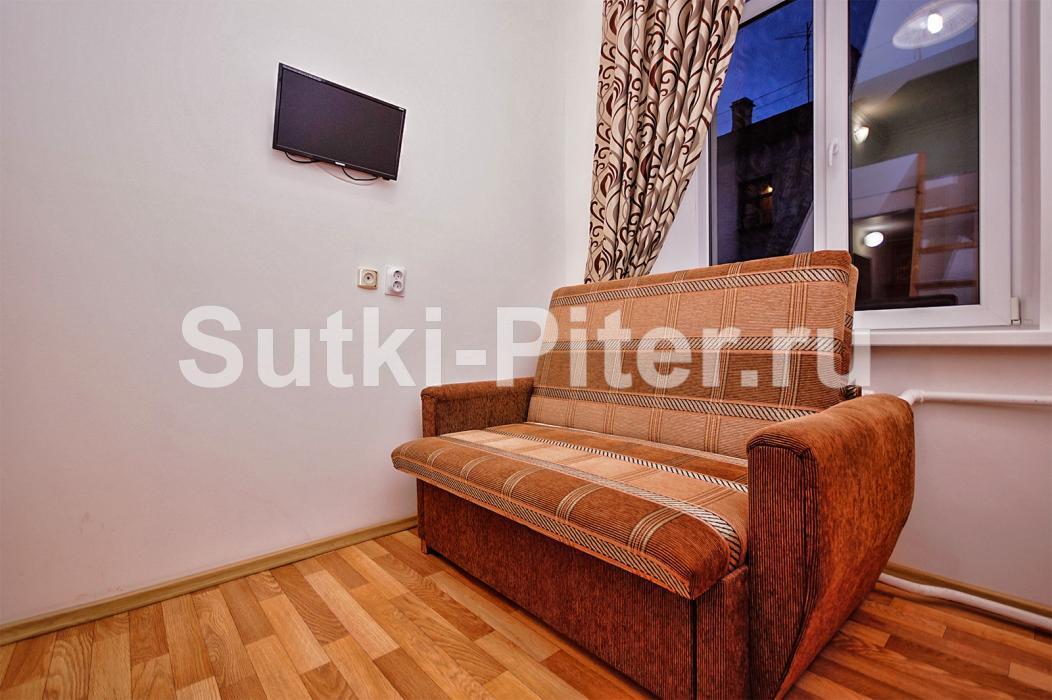 — Mini-Studio with all amenities on Gorokhovaya street in the city centre, 5 minutes walk from the metro station "Sennaya/Sadovaya/Spasskaya" and a 10-15 minute walk from Nevsky prospect.
Comfort class
«econom»
Rooms
1
Beds
2
Area
12 m2
Floor
3 in 4
Price a day
from 1500 rub.*

Due to the situation, prices by season may be lower, please specify!

* During the white nights and holidays the price may exceed
the maximum price of the season!  More about the seasons and prices

Book
Note
Go to selected
Book
This apartment has a reviews.

Mini-Studio with all amenities on Gorokhovaya street in the city centre, 5 minutes walk from the metro station "Sennaya/Sadovaya/Spasskaya" and a 10-15 minute walk from Nevsky prospect. Pea street - one of the first streets of the city. From here begins the Saint Petersburg. Only 15 minutes walk pea - and You at the Admiralty and Palace square. All the most interesting sights of the Northern capital You can explore, walking distance to the most beautiful places of the Central part of the city. Next - the shopping center "Peak" and "Senna", shops, cafes, restaurants, boutiques, banks, pharmacies, hay market.

The Studio is located on the 3rd floor. Small private yard. Entrance from the yard. The Windows overlook the courtyard, double-glazed Windows. In the yard is possible free Parking. Paid Parking-5 minutes walk from the house.

Possible occupancy - 2 persons. The same Studio ID 69 - next, the description and the reviews here.

Reporting documents are provided for business travelers ( all necessary information will be provided by the Manager).
Book

Early booking-from 5 days. Smoking is not allowed in the apartments (only by agreement - on the balcony or in designated areas). It is strictly forbidden to hold events and violation of public order ( loud sounds after 23 hours, etc.). Full booking details here.

Upon arrival, a security Deposit ( refundable cash Deposit for the keys, public order and the safety of property in the apartment) is paid.

In case of cancellation, the Deposit will be refunded only if the cancellation is made at least one month prior to arrival or at a convenient booking schedule.

Reporting documents for business trips are provided ( the Manager will provide you with detailed information).
...

Please note! The site prices are "high" and "low" seasons! The cost of your request depends on the number of people, the number of days, seasonal price changes and periods of increased activity (weekends, holidays). Check with the Manager!

Periods of activity are divided into:

Average price within the season is calculated based on the average rental period (5-7 days) and average occupancy (number of people).

Manager will offer you the best price! Sometimes in high season you can rent an apartment at a low price — there are always special offers!

customer Reviews about the apartment:

Please leave a review on the apartment

If you have already used the service of booking apartments in St. Petersburg on our website, you can leave your feedback or recommendations. This will allow us to get the most reliable information about the object and further improve the quality of services provided. Thank You in advance!

He was resting in Peter from late June to early July. The weather didn» t make you happy, you wouldnt tell me about the studio. The hostess herself, Kengjoule, explained everything at once and told about the rules of conduct, showed where and what was in the apartment itself. Her son, Arman, is also a very friendly young man, if he needed help. I was in town with a friend and a daughter, and I had a baby in my stroller. So in the meeting, the hosts helped lift both the stroller and the stroller. The point is that the studio is on the 3rd floor, there is no elevator in the house (what we were warned about when booking). Also, in the aftermath, we were allowed to use the keys from the gate, which are at the entrance to the courtyard, so that we do not have to pull the stroller through the wicket-gate. The emptiness of the entrance was perfect. There is everything necessary to live: a combined bathroom, a refrigerator, an induction plate, a TV, Wi-Fi, a sofa bed on the first floor and a 2-bedroom mattress on the second floor, a microwave. There are also all the necessary means of washing up to the means of basic necessity (type of soap and toilet paper). 2 towels per person and bed linen were changed every 5 days. Theres a little bit of crockery in the studio, but you can use it in general. My girlfriend and I used to take extra, and the basics of baking (eating silicon as well as metal). A couple of times, we had picnics in the parks, so the hostess helped us with the grass. When we talk about the location of the studio, its perfect. Most of the citys attractions are within walking distance (we have travelled 5 times per metre in two weeks « time, because it is almost all the way to walk). But if necessary, the subway is only a 5-minute walk away, and it is 2 (Sennaya and Sadovaya), so out of 6 branches 3 at your disposal near the house. There are a lot of grocery stores in the area, there is a shopping mall and a market (vegetables, mostly there are prices below). By the way, the address of the shops and the market was given to us by the owner of the studio. There are many different cafes and restaurants in the apartment, and a 10-minute walk is the Yusupow Park (not very large, but there is a playground and a nice pond).The only minus in the apartment is we didn» t have enough room for things. There was a hanger with shoulder arms and everything on it, and there was no place to put the place (we had all the windowsill, and the underwear and the little things had been removed in one of the kitchen cabinets), in general, there would be no need for a couple of sticks. But, in any case, we liked the studio very much, so it was brave of her to stay in St. Petersburg.
Author: Oxana    Period: June 2017 года

This is a very good attempt to create a cosy from a communal apartment, very similar to a mini-apartment, a bathroom in each room, a [ [ induction tile]], which allows you to cook a small casserole soup or to fry an egg (for large-scale cooking, you can use the kitchen), microwave to warm the pastries from the 30% discount, the discount sofa at the bottom for those who do not want to climb the steep wooden staircase to the second floor of the room, and a light switch on the second floor of the room Second floor, to stay out of this stairwell in the dark ... In general, the conveniences are very thoughtful. But there is also an inconvenience (except for the staircase): you cant throw a paper in the toilet, which you always forget, the mattress is right on the floor, it is a little cramping in a sleigh, and all that for the price of 3-room apartments in Montenegro with a view to the sea! But this is not a claim to the masters (Kenzheul and Armand are very welcoming and receptive) in any case. This is the city of dut prices, and no one will be able to recommend it as a destination for tourism. But if youre still in it, youre not likely to find better quality housing in an economy segment. Perfect purity. The rest of the citys heart, including the railway stations and bridges, is very important in the event of traffic congestion and when the time for all sightseeing is not enough. In general, this is a good option, both for short and long stay
Author: Michael    Period: May 2017 года

I was in August 2016. It was a good one. The studio is clean. Theres everything I need. Next to the subway. Be quiet. The mistress is very good. I recommend it.
Author: Ludmila    Period: August 2016 года

We lived in St. Petersburg with a daughter of 10 days in August 2016 in this room with all conveniences, and we were all very pleased, especially good and welcoming hostess!:) Nesdoubt plus is the location in the center of the city.The house itself is old. Its over 150 years old, but its interesting.It adds a certain flavor and creates a special atmosphere. If you wish, you can even cook or heat up cooked food. Theres even a washing machine with good powder in your place!:) If you talk about the infrastructure, there are a lot of shops (the largest-the Crossroads), the subway station, atmospheric coffee shops, where you can sit in the evening or have a cup of coffee in the morning and just a lot of interesting and useful shops and even a market.We are glad to have opened this place for ourselves and will be happy to come back here again, and we will recommend to all friends and acquaints.
Author: Tatiana    Period: August 2016 года