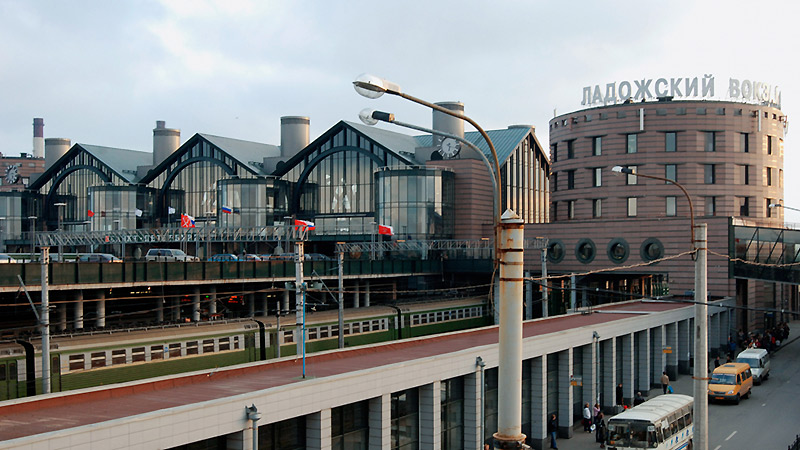 Ladozhskaya metro station (built in 1985) is located near the center of Saint Petersburg, just 3 stops from the Central metro station "Dostoevskaya/Vladimirskaya", located almost in the center of all the main attractions of St. Petersburg. There is also a convenient and fast connection to the city center by your own car or land transport.

Ladozhsky train station is located near the Ladozhskaya metro station. it is the youngest train station in St. Petersburg ( opened in 2003) and the most modern. The author of the project is N. I. Yavein. This is a unique project that has no analogues in Europe. The station building is compact, adjacent to the metro station and is located on several levels - upper and underground, which in General provides a huge area of accommodation. The upper levels are intended for servicing long-distance and international trains, while the underground levels are intended for commuter trains.

At the metro station-a huge shopping Mall "Zanevsky cascade", comparable in area to 17 football fields! Many restaurants and cafes, about 400 stores of famous brands, 12 cinemas, children's entertainment center. Here, next to the train station and metro station is located Ladoga grocery and clothing market.

Also not far from the metro station is the old manor "Utkina dacha" (built in 1790), which has changed several owners, managed to visit institutions for charity and medical purposes, very much dilapidated; since 2012, restoration work is being carried out here and excursions are conducted.

Between the okkerville river and the O'key hypermarket, Russia's first fishermen's Temple, or the Church of St. Andrew the first-called, has been erected.

There are also Ladoga Park and Malinovka Park with picturesque ponds that were formed on the site of the filled-in river. In the Park - Pokrovskaya Church, shopping and entertainment complex "June" and a tennis club.

In the nearest location - an architectural monument, the estate of Prince Bezobrazov. This is a small stone Villa on the shore of a picturesque pond. Presumably the project's architect is Giacomo Quarenghi. Restored in post-Soviet times from photos.

You can also see the monument to the Russian jeweler, Karl Faberge from Saint Petersburg, installed in front of the Samotsvety store.

Thus, the purpose of your trip to the area of Ladoga railway station can be not only business, but also informational. Along with the Central attractions, you can also visit interesting local attractions and get a lot of new experiences.