If you come to St. Petersburg for sightseeing and plan to rent an apartment in the center of St. Petersburg-be sure to visit the Summer garden. 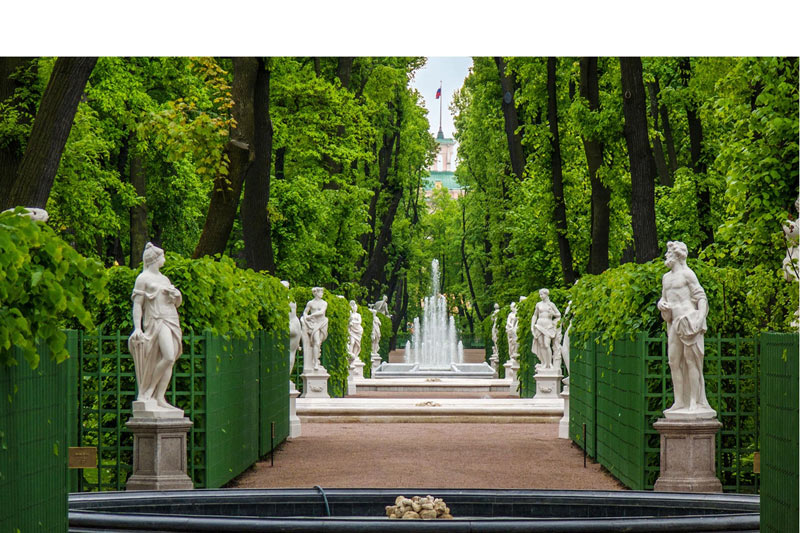 Summer garden is the first Park in St. Petersburg. It was founded in 1704. Peter decided to create a garden more luxurious than at Versailles. A huge area was allocated for the Park along the Neva river from the current far border of the Park to Nevsky Prospekt. The development of embankments has changed and now the Park is only part of what Peter once planned. At the moment, it occupies an area surrounded by the Neva river, Fontanka, Swan ditch and Moika. The garden ensemble has been created for more than 20 years. But by the time the Tsar's court moved to St. Petersburg in 1712, it gave the impression of a large and well-maintained Park. It was designed under the direction of Peter himself and created in the regular style that was then fashionable in Europe, which was also called "French". Straight alleys in the Park were located symmetrically and formed platforms of the correct form. Sculptures and fountains were installed at the intersection of alleys. The greenery was used to create quaint arbors, galleries, mazes,and flowerbeds. According to the plan of the Emperor, there should have been about 200 Italian sculptures, numerous plantings, including exotic, greenhouses, fountains.

Previously, the garden was divided by the canal into 2 parts - the front and economic. The front part adjoined the Neva river, where assemblies and celebrations in honor of victories in the Northern war were held under Peter. In the economic part there was a stone gallery, a sculpture workshop, greenhouses, a pond with carp, fruit trees, and beds with herbs. Peter called this part of the Park the Tsar's garden. Soon the Park turned into a summer Royal residence - at the confluence of the Fontanka river with the Neva river, a wooden house was built first, and in 1712, a stone Summer Palace of Peter was built by Domenico Trezini, which has survived to the present day. It was modest enough, without pomp, but solid and comfortable. It is decorated with 29 bas-reliefs in honor of the victory in the Northern war. Fountains were a special feature of the Summer garden - they were located in labyrinths and side alleys. And in the center of the Park was installed the largest five-jet fountain. Fountain reservoirs were decorated with marble, Pudozhsky stone, shells, they were decorated with statues, busts, vases. Water for them was supplied from the river, which was later called Fontanka. Unfortunately, the fountains lasted until 1777 and were destroyed by a catastrophic flood. Now in the Park-a newly created small part of them.

Next to the Summer garden was a large meadow where military reviews, fireworks, and significant events were held. Subsequently, it was called the field of Mars.

Summer garden is the first public parade Park in Russia. They not only rested here, but also held public holidays in the European style, and received foreign guests. And now the Park is a favorite place for walks and recreation not only for citizens, but also for numerous guests of the Northern capital.

The Park is waiting for You. Be sure to visit this cozy romantic corner of Northern nature, a walk through the Park will fill you with inspiration and peace. And to make your trip to the beautiful city more comfortable, we offer you to use our resource and rent a cozy apartment for rent in the center of St. Petersburg.