We offer you to take a short tour along the banks of the Neva river and, first of all, on the University embankment, one of the most beautiful embankments of the city. There are no random buildings and structures-each is unique in its own way and is a historical and architectural monument. 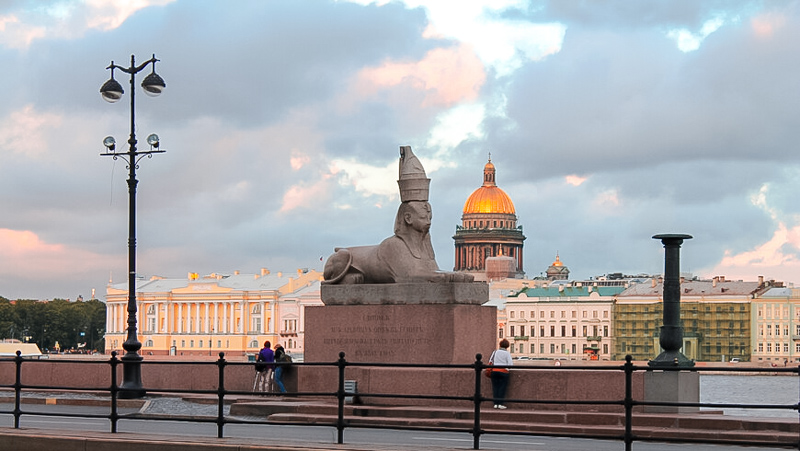 The Neva river is the main waterway of St. Petersburg. The length is small-74 km, but the river is very deep, with many whirlpools and drops in depth. Unfortunately, due to the large pollution of the water basin, swimming in the Neva river is strictly prohibited. But continue to be enthusiasts and bathing continues!

The University embankment starts from the Annunciation bridge and ends at the Palace bridge. Blagoveshchensky bridge is the oldest bridge in St. Petersburg. Appeared Under Nicholas I, that is, from 1703, the year of Foundation of St. Petersburg, and until the time of Nicholas I permanent bridges across the Neva was not-were satisfied with temporary structures and watercraft. This is the main reason why the center of St. Petersburg could not become, as planned, first Petrograd island, and then Vasilevsky. Annunciation bridge is named after the Church of the Annunciation, blown up in Soviet times. The bridge links the Admiralty and Vasilevsky island.

The first building on the University embankment from the Annunciation bridge is a beautiful building of the Academy of Arts, which was built in the era of Catherine II and still continues to carry out its activities. Repin, Aivazovsky, Bryullov and many other Russian artists came out of the walls of this Academy. Next to the building of the Academy is the Menshikov Palace, the residence of the first Governor of St. Petersburg and the closest ally of Peter I-Alexander Danilovich Menshikov, according to some evidence - the largest bribe taker in the history of Russia. It is not surprising that Menshikov's Palace is several times larger than the Palace of the Emperor himself.

Next - three buildings that are part of the largest educational institution in the city - St. Petersburg State University. The main building is the red building, which was originally built as the building of 12 ministries of the Russian Empire or 12 Colleges. The architect of the building - Domenico Trezzini, who also built the first building in St. Petersburg on hare island-Peter and Paul fortress. A distinctive feature of many of its buildings was their long length. So the building of 12 Colleges is 382 meters in length. Further behind the University buildings is a yellow building with columns - the building that was built for the Academy of Sciences, and now it is the Institute of linguistics.

After the Academy of Sciences-a green building with a tower and a globe crowning it - the building of the Kunstkamera ( translated from German-the chamber of curiosities). Indeed, different rarities began to collect even Peter the Great, who tried to save them for posterity. For example, stillborn babies with developmental disabilities are alcoholized. Further behind the Kunstkamera there is also a yellow building with columns - this is the building of the Zoological Museum, which has collected a huge collection and is famous primarily for the largest collection of mammoths. The building of the Zoological Museum closes the University embankment. To the right goes the Palace bridge leading to the Palace square, and on the left we see a red Rosstralnaya column decorated with sculptural images of the prows of ships, the so-called rosstra-a symbol of the victories of the Russian fleet. At the top of the column lit a torch and it served as a beacon.

On the embankments of the Neva river you can wander endlessly-the magnificent paintings and the water surface of the full-flowing river pacify and inspire. You can also make water excursions and get acquainted with all the Central embankments at once-along the Neva several piers. On a speedboat or two-deck ship You will make a fascinating journey that will be remembered for a long time.

We are always waiting For you to visit and are ready to provide you apartments in the center of St. Petersburg cheap. Come!