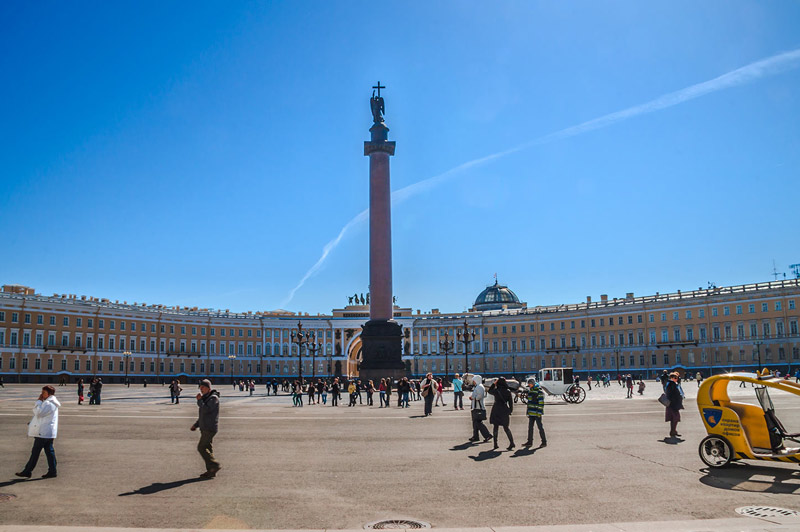 Usually, the tour along Nevsky Prospekt begins with the main square of the city - Dvortsovaya. It is impossible to tell about Nevsky Prospekt without telling about its source - Palace square. Palace square is one of the most beautiful squares in the world, It consists of building the Winter Palace, the General staff headquarters of the Guards corps; in the center is a monumental building - the Alexander column.

At the beginning of construction, the Admiralty shipyard also had a strategic function of protecting the young city from enemy attacks from water or land. Therefore, a fortress wall was built around the Admiralty, a ditch was dug, and guns were displayed. And in front of the fortress and to the side of it ( on the site of the current Palace square) was left an open space - "glacis", which initially had a fortification value, but soon lost its function, was occupied by warehouses of the Admiralty shipyard, and later - a large sea market. This area later became Admiralty meadow. In 1735, the Imperial court of Anna Ioanovna moved from Moscow to St. Petersburg - to the Winter Palace, rebuilt according to Rastrelli's project. The facades of the Palace faced the Neva river, the Admiralty and the Admiralty meadow, which was a huge clearing with small ponds. Soon the meadow became a favorite place for high-society entertainment and folk festivals, which sometimes acquired a very wide scope. Large pavilions were erected, wine fountains were built, and huge bull carcasses were roasted for the people…

The winter Palace was rebuilt many times under the direction of Rastrelli. In 1753, he also completed the first project of the square in front of the southern facade of the Winter Palace. According to the project, the square was supposed to look like a circle with a colonnade. But during Rastrelli's lifetime, the square was not completed and was subsequently rebuilt many times. In 1762, the construction of the Winter Palace was completed. Its Grand opening was supposed to take place by Easter, but since the rubble of construction debris in front of the Palace was not removed by Easter, Peter III makes an unusual decision - allows citizens to disassemble everything on the square for free. And the square becomes empty in just a few hours. Peter III, who ruled for only a few months, did not have time to improve the square.

Catherine II, who overthrew him, instructs the Commission of stone buildings under the leadership of A.V. Kvasov to develop a General plan and begin construction of the square, which in 1763 officially receives the name of the Palace. In 1779, the square was redeveloped under the direction of Yu. Felten.

In 1819-1829, two grandiose buildings were built - the building of the General staff and the building of the Ministry of foreign Affairs and Finance, which are connected by a magnificent triumphal arch, the genius creation of K.Rossi, extant. This is one of the main works of the famous architect, which perpetuated the victory of the Russian army in the war of 1812. A solemn and elegant structure is the dominant feature of the entire architectural ensemble. The arch is decorated with a chariot of Glory with six horses rearing up and as if soaring into the sky over the square.

The entire architectural ensemble corresponds to the size of the Winter Palace, but the style is its complete opposite.

According to the architect's plan, the elegant and elegant appearance of the Winter Palace was to be balanced by the strict and majestic facade of the new building. The center of gravity of the entire architectural ensemble of the square is transferred to its center, which is emphasized by the Alexander column erected in 1834. The author of the project - Auguste Monferran. In this way, Nicholas I wanted to perpetuate the memory of his brother Alexander I's victory over Napoleon. The Alexander column is the tallest granite monolith in the world ( 47.5 meters), it weighs 600 tons and is held on the pedestal only by its own weight. The monument is crowned by a sculpture-a gilded angel with the face of Alexander I, by the sculptor B. Orlovsky. One hand of the angel is raised to the sky, in the other he holds a cross. If you look at the sky, for example, from a certain point of the Trinity bridge, then if you look closely, you can see an angel with a cross, as if floating freely in the sky. The column's pedestal is decorated with bas-reliefs celebrating the victory of Russian soldiers.

The square's appearance is completed by the guards ' headquarters building built in 1843.it fits perfectly into the existing ensemble, which is a merit of the famous Russian artist and architect A. Brullov.

All this must be seen with your own eyes. Petersburg is always hospitable and waiting for its connoisseurs. To make your trip unforgettable and as comfortable as possible, we are ready to offer you to rent cozy apartments for daily living in St. Petersburg.