If you are going to St. Petersburg, on a romantic trip and have already decided on the selection of housing - apartments for rent in St. Petersburg, it's time to think about the cultural program and leisure time. In St. Petersburg, there is always something new, original, able to surprise even the sophisticated traveler. One of such places, which has already earned the attention and love of our citizens, is "New Holland". 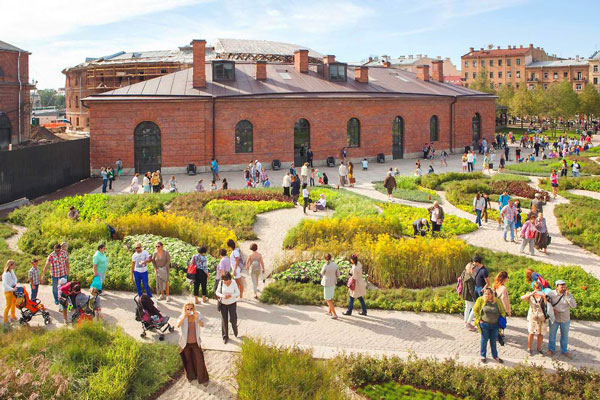 Island "New Holland" -a unique new Park-island in the heart of St. Petersburg. The main goal of the project is to turn the architectural monument into a comfortable place for citizens and guests of the city. The history of the island begins in the 18th century and its present name he received at the same time. Peter I was actively engaged in shipbuilding and invited Dutch masters to work at the shipyards, suggesting to create a new port on a foreign model. The Admiralty and Kryukov canals were equipped, on the territory of the island there were buildings for forest storage. Savva Chevakinsky, Jean-Baptiste-Michel Vallin-Delamot contributed to the development of architecture, and Johann Gerard finalized the projects and implemented most of them. Construction was carried out for many years, but the project was never implemented. In the 19th and 20th centuries on the island began to appear structures that are not related to shipbuilding. The most famous of them is the sea prison "Bottle" (project arch. A. Staubert).

The idea to use the island for cultural purposes appeared in 1977, its author, Benjamin Fabrycky. But the restoration began only in our century. Restoration was carried out by the company "New Holland development". In 2016, after the first stage of restoration, the Park was opened to the public.

commandant's House. It was built as a house for the commandant and his family. It received the status of an architectural monument only in 2013. Now in the building there is a school of creative industries "Mayak" for children from 5 to 17 years.

Bottle. Round building, former prison for sailors. Now in the courtyard of the "Bottle" - the scene where the concerts are organized. In summer, various cafes and restaurants are located around the stage on the open verandas that occupy the ground floor of the building. Just a "Bottle" 4 floor: 2nd floor - retail; 3-m - beauty shop, babershop, ballet and school of Boxing, Cycling Studio, etc.; on the 4th floor - design Studio and the administration of New Holland.

Forge. One of the first buildings of the island. At Peter I here was the forge. Today in the building - club and restaurant "Kuznya House".

In a small pavilion, on the left side of the entrance is the InfoCenter.

On the territory of the Park-Islands as temporary buildings there is a < b>Stage for music and theater groups, as well as Pavilion for exhibitions, lectures, etc.

For children organized Playground "Frigate" ( is a large frame of the ship) and Playground for kids. Between the forge and the Playground- Herb garden with cereals and flower beds from around the world. Also in the Park landscaped special recreation Areas and Lawn to relax on the grass. And even Beach!

Park island is still under restoration, but already loved by citizens and guests of the city. On the territory of several comfort zones. For everyone there is something different, no one will remain indifferent. And at the same time everything is very democratic and European!

Here is a new cozy corner appeared in the heart of the city!

Be sure to visit this place. We are sure That you will appreciate this very beautiful place! And if you need to stay rent an apartment in St. Petersburg, be sure to use our resource, and we will provide you with a decent choice and affordable prices!