Autumn festival of fountains in Peterhof

Visiting St. Petersburg in September can be no less romantic than in the season of white nights and summer months. Railway and air tickets, housing - apartments for rent in St. Petersburg-much cheaper! No queues and bustle of the high season! And early autumn foreshadows fine days and a riot of colors in the parks and gardens of the city! Very attractive period to visit the Northern capital! And the most important thing in September that attracts tourists from all over the world is the annual Grand autumn festival in the most famous elite suburb of St. Petersburg, the city of fountains - Peterhof. It will be held this year on 20 and 21 September, the time-21 hours. The multimedia show, which will take place at the Grand Cascade, is annually dedicated to certain dates, events and famous historical figures. This year marks the 290th anniversary of the birth of Catherine the great and the holiday is held under the thematic name "Empress". Catherine II loved Peterhof and especially revered its founder Peter I, whose life principles were a role model for her. From the moment of Catherine's arrival in Russia, Peterhof held a special place in her heart. The most significant events in her life are connected with Peterhof. From here began the path of the great ruler to power. 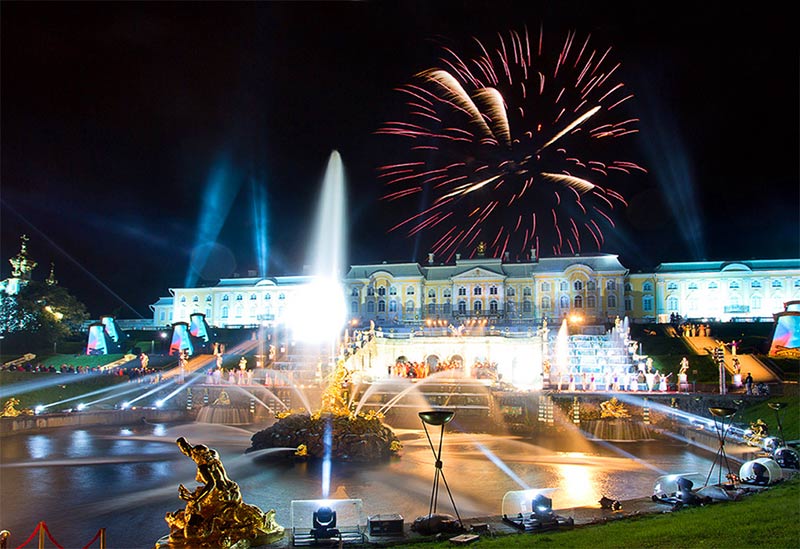 The festive hour-long performance will be presented in 10 parts, which will highlight the main milestones in the life of the glorious Empress. With the help of high-tech multimedia technologies, the organizers of the play will try to create the effect of maximum immersion in the distant era of the XVIII century. The final chord of the show is a Grand fireworks display. Be sure to come, you will learn an unforgettable experience!

Peterhof - the nearest suburb of St. Petersburg, transport links-the most convenient and fast. The most pleasant and the shortest trip from the city center - on the meteor on the Neva river with access to the Gulf of Finland. Travel time-30 minutes. Several berths are located from the promenade des Anglais to the Hermitage. You can get there by taxi, which depart from 5 metro stations on the red line ( from metro station "Baltiyskaya" to metro Station "prospect of Veterans"). Journey time of 30-60 min. And the third way is by suburban train from Baltic station ( about 40 minutes) from the station in Peterhof taxis. A trip on any form of transport will not seem tedious to you!

You have not yet decided on the choice of apartments for short term in St. Petersburg? We will help you to make your search as fast and comfortable as possible!